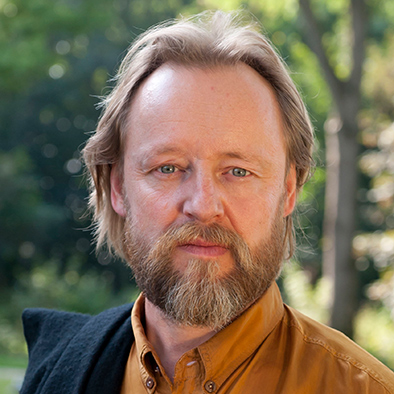 This interview deals with the topic of spiritual awakening and makes it clear that awakenings are not all the same, but that there are stages of incomplete awakening that are different from a final realization of the SELF. It also treats the paradox of awakening as a maturing process in time and as a timeless moment. And finally it deals with a trap on this path: the ego-mind, which appropriates experiences of awakening, making them its experience in the sense of a naive "I’ve got it".

Dialogues with OM C. Parkin
Excerpt from a conversation between students and OM C. Parkin in 2016

OM, we would like to talk to you about this topic: What is awakening? We would like to start with a quote from you: "What humans are really looking for, call it enlightenment, perfection, bliss or liberation, is available in this moment and I cannot say how it happens. I can only say that it is possible for you, that there is no higher power, no God who denies it to you. If there is an obstacle, it is within yourself.“

You have been working with people, with spiritual seekers, for 30 years now. In your experience, what are the obstacles in people for awakening?

Does this mean that they claim to have an interest in awakening, but in the end it is not big enough?

OM: The masses have no interest at all. And from the circle of those who call themselves spiritual seekers, most initially have too little interest, so that the inner fire has to be awakened first.

After all, there is a reason why a seeker goes on a search. Often one hears: in order to end the suffering. Do you see this at first as a good reason and as an expression of interest?

OM:  By what it means to end suffering, the ego understands something completely different from the wisdom teachings. At first, one cannot expect a person who sets out on a quest to immediately and comprehensively gain an understanding of what it means to end suffering. It does not mean to pacify those states to which, as the ego believes, unhappiness clings. To end suffering in the sense of the inner teachings means to comprehensively abandon the identity of the ego-mind and to change from a personal identity to impersonal being that has no end. By suffering we understand first of all - which is understandable - conditions that we evaluate negatively. These are states that in a very direct way cause a consciousness of suffering, even if limited. Let us take so-called negative emotions, let us take rigid, compulsive thought structures that repeat themselves, let us take a cocktail of both called "depression". These are states that a normal person would find painful. However, from the perspective of the inner teachings,  suffering, or the actual causes of suffering, by no means must appear in the human being in a painful way. On the contrary. Much more important on the path of knowledge are those states which cause suffering, but are perceived as experiences of happiness.

In the wisdom teachings, suffering has a much more comprehensive dimension: The ego state itself, i.e. the identification with the thinking mind and its worlds, is suffering. Any ego state, whether it is experienced as pleasurable and satisfying or as painful and unfulfilling, is suffering. It is obviously the entity that holds all these states together that bears the actual responsibility for suffering. And not what it creates. So the crucial question is Who? and not What?“

Could one say from this perspective that what the beginner of the path understands by suffering and wants to get rid of, turns out to be one of the obstacles on the path? Not wanting to have certain emotions, negative feelings anymore. Or to want to exclude something?

OM: Steps that were just healing for a person progressing on the path can turn into poison at a later time. But it can also be the other way round. I sometimes use the image of walking aids or crutches here. These crutches may have been of a supportive nature at one stage of your journey, but when someone is able to walk, or has already developed the qualities of a marathon runner, he doesn’t want to carry crutches around with him anymore, to stick with the image.

OM:  Awakening experiences are firstly of a temporary nature and secondly characterized by the fact that complete penetration of the thinking mind has not happened.

I would like to ask again about the statement "Not all awakenings are the same". Are there different forms of awakening?

OM:  No, but there are infinitely many forms of awakening experiences.

Exactly. So does this mean that awakening actually exists only as a complete realization?

OM:  The statement "Not all awakenings are the same" actually means that many people who have had or are having awakening experiences confuse them with full awakening. In my experience even most of them. And as long as the awakening experience is present, it can indeed pretend boundlessness, complete boundlessness. The limits are possibly only revealed at a certain point in time, namely when this experience of awakening comes up against limits, that is, the limits of an ego-mind’s understanding, the limits of an ego-mind that was supposedly no longer present.

That is, they themselves do not even realize that they are still dealing with the mind at all?

OM:  The mind is a highly subtle creature, and we know from experience that the mind - I have often observed this in India with Papaji, not with Papaji himself, but with students there on site - can temporarily seem to dissolve completely and then subtly return as identification, at first without the person’s knowledge.

This means that before the awakening, the person did not really deal sufficiently with the mind, with the question: What is the mind? Can one say this?

OM:  There is an insufficient knowledge of the inner opponent, yes.

Let's take the example of how I have experienced this in other contexts with students. I called it the "breaking through into love", which seems like an unconditional stream of unconditional devotion. And then, seemingly out of nowhere, moral judgments appear that are "true". How can the whole concept of morality, just like the concept of immorality, exist in an empty mental space? Isn't that a valid question?

That is certainly a valid question.

OM: Identified value systems - and morality is one of them - belong to the world of unascended thoughts, i.e. they can’t be witnessed as thoughts at first. Awakening experiences do not completely penetrate these personal worlds of ideas. They dissolve them only temporarily. Awakening experiences are by no means the end of the ego. They are not even necessarily a weakening of the ego, they can even disguise hidden shadows and lead to elevation and self-deception.

In 2014 you published a text "Premature Claims to Enlightenment" in which you attested exactly this confusion to many "Satsang teachers". At that time it was about an event in Berlin, the so-called "Forum Enlightenment". In your opinion, this was not a “Forum of awakened ones", but at best a “Forum of awakening ones". You spoke of a "fake label". You invited a woman from this environment to Gut Saunstorf to share her awakening experience with the Sangha. That was so far okay and in tune. When I later read her correspondence with you, I was quite shocked by her loss of reality. She did not know where she really stood. What I found was arrogance and elevation. I still remember this sentence of hers: She believed she had never had anything to do with the subject of power...

OM:  Elevation only means that someone does not stand where he thinks he stands. Elevation is unrealized mind. She didn't even understand what I was telling her. That is  actually not possible  in a state of elevation. When elevation appears then even under the cloak of love, deception and abuse occur, which is not recognized by the person him-or herself as well as by most students.

I then saw her at an announcement for a panel discussion of a large esoteric congress on the topic: "Is there an abuse on the spiritual path?“

OM:  "Making the buck the gardener" is the popular saying. Finding the truth in the words used alone is often not possible. It then needs a personal encounter, a Dharma talk. It allows and makes it easier to read between the words. However, I make the same experience again and again: people who are not aware of the limitations of their judgment come to their (pre-)judgements in the distance, never in the near. Therefore they do not come to me, avoid direct encounter and do not ask. For the mind is afraid of exposure.

Isn't that a justified fear of the ego?

OM:  No, humility has no fear of exposure.

The awareness of limitations seems to play a crucial role in further deepening the awakening experience.

OM: This is a dialectic of the Path. Only the awareness of limitations can lead to infinity.

OM:  How often do you think I hear the sentence "I follow my heart" while seeing something completely different? Well, first of all the question is what is actually meant by ’heart’. In the textbook Intelligence of Awakening there are detailed explanations of the fundamental confusion of many spiritual people between the heart and the heart center. The heart center is not the heart of the human being. If I ask people: "Put your hand on the heart," they will of course put their hand here [pointing to the heart center], where else should they put it, since they cannot put it in a non-place. Speaking of the heart the wisdom teachings do not mean the heart center, and maybe you even remember my autobiography The Birth of the Lion. There I describe such a moment of shifting the attention, in Castaneda a "shifting of the assembly point". Ordinary people unknowingly succumb to the impression that the center of their attention is located in their head. The perceiving is in the head and outside the perceiving are the objects of perception. This is a classical dualistic perspective. And there is a moment in the autobiography where I describe how the place from which perception is apparently perceived drops "from the head into the heart". It is a much more direct form of perception that melts duality but doesn't completely dissolve it, even if it looks that way at the moment. So when the perceiving drops into the heart center and the world is perceived from there, this is a partial absorption of the thinking mind, which perceives the world through projection, and a temporary state of oneness is established. This can also happen in a state of infatuation: Everything is love and the whole world is contained in it, it is a state of oneness. But Advaita is not a teaching of oneness. The human heart, of which the wisdom teachings speak, is found neither in the gross nor in the subtle body of the human being. The fall into the heart center can open a way into the heart. But it can also lead to a new landing.

'A compelling guidebook for the earnest pilgrim of any spiritual, philosophical or religious path!' - Quote by Regina Sara Ryan, Author USA